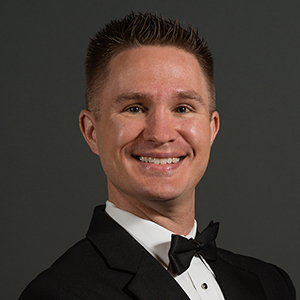 C. Paul Heins, associate conductor, joined the GMCW artistic team in the 2014-15 Season. One of his chief responsibilities is the direction of the GenOUT Chorus, established by GMCW in January 2015 for LGBTQ and allied youth, ages 13-18. Under Dr. Heins’ direction, the GenOUT Chorus has performed at Lincoln Theatre, Atlas Performing Arts Center, The Kennedy Center, and the White House, and in 2016 made its debut GALA Choruses performance in Denver.

Paul was previously the director of the Concert Choir at Georgetown University, where he also taught music theory, piano, and introduction to voice, and served as music director for the university’s opera and musical theater productions. He is also the past director of the Lesbian & Gay Chorus of Washington.

Dr. Heins was trained in piano and flute at Bowling Green State University (B.Mus.), flute at the University of Maryland (M.Mus.), and choral conducting at the University of Maryland (D.M.A.). His principal teachers have been Edward Maclary, Patrick Walders, and Mark S. Kelly (conducting); William Montgomery and Judith Bentley (flute); and Virginia Marks and Victoria Harris (piano). Paul is a frequent guest pianist, flutist and conductor in the DC area.